Battle of the Bands: Somewhere Only We Know 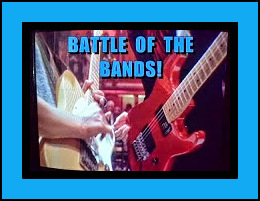 Look up in the sky! It's a bird! It's a plane! It's one of my guilty pleasures:

THE BATTLE OF THE BANDS!


This music blogging event was first introduced by our friends, Fae and Stephen, and I'd like to give them a heartfelt "thank you":

Everyone has a guilty pleasure and I'm no exception. In fact, I've got more than a few musical "guilty pleasures;" those songs I really don't expect equal enthusiasm or many high-fives for them...nor do I care (Insert grumpy old man: "Chick tunes! Who let her in the battle of the bands? This is a manly place!").


As I pulled this together, I suspected this will not be a favorite and yet I go forth! I'm a rebel...a loner...

In 1995, Sussex's own musical imps formed the band, Keane. Much more popular in Great Britian, I believe, but the internet keeps me pumped full of European radio; which I do indulge in. Thank you, Al Gore.

Their first album, Hopes and Fears, remains my favorite album from this band and in January 0f 2004, the single "Somewhere Only We Knox" was released as a single. I've always liked this song, especially the chorus, and the video just cracks me up with it's woods' sprites or whatever they are supposed to be. I've got a friend who mocks me by calling this song "Somewhere-Only-We-Know-a-Weird-Alien-is-Watching."

Hey, back off...it's Druid rock. They go WAAAAAY back to their ancestral roots. See? There's another root right there...looking at you.

Nonetheless, I surprised to find covers of this song!


This is one time where the video is almost too interesting. I find myself wanting to draw bunnies... oh, was someone singing?

Everything in my being wants to like Glee, but I just can't get into it. I do, however, like the sound of some of their covers. I run into them from time to time when I'm looking for Battle of the Band fodder and make a mental note..."that one might not be too bad..."  I'm a sucker for a choral arrangement or harmonies.

But this is not about me...oh, no: What do YOU think? Lily Allen or Darren Criss? Can they pull it off without weird woodsy critters?  Time to vote!

Then, pop over to my pals' blogs n' battles!