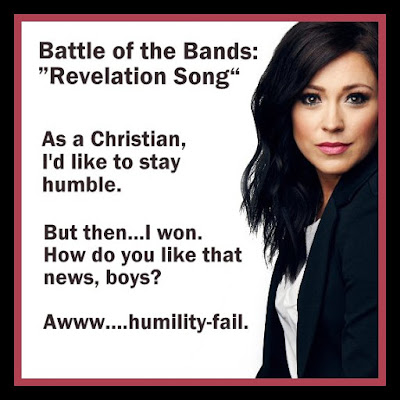 At the start of the battle for Revelation Song, Kari Jobe came out strong and then The Newsboys pulled up from behind and this was anything but a landslide. Final score:  Newsboys 9, Kari Jobe 10.


So, the victor, Kari Jobe, sings us out but I'm adding an honorable mention Newsboy song, too. I sense a platform of party unity can be achieved. On music, anyway. It's a start.


The Newsboys: "God's Not Dead"


Now, go see how your vote stacked up against the others. Do you have the magic touch...er, ear? Are you a music critic in the making? Or just a tune flunky, like myself? Go! Quit hanging around here, they're waiting.

Hope to see you on the 1st! Have a safe, BLESSED Thanksgiving!

ANGELS BARK
CURIOUS AS A CATHY
DISCCONNECTED
J.A.SCOTT
JINGLE JANGLE JUNGLE
MIKE'S RAMBLINGS
STMcC PRESENTS BATTLE OF THE BANDS
THE DOG LADY'S DEN
THE SOUND OF ONE HAND TYPING
TOSSING IT OUT
JANIE JUNEBUG RIGHTING AND EDITING
YOUR DAILY DOSE
Posted by Cherdo at 8:59 AM