Lord, It's the Battle of the Bands: Revelation Song 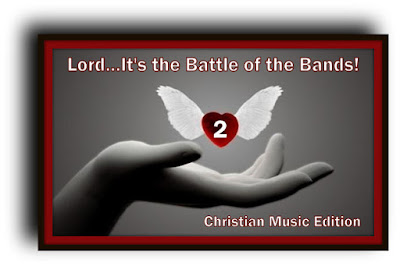 Can we give it up for the big man? No, not Stephen T. McCarthy, though they are comrades, but the BIG BIG man? Why the puzzled look? Okay, to be clear, STMcC is my brudder, but I'm talking about the MAN himself: the Lord, God, Almighty. Turns out, there's more than a few amazing musicians turning out some great tune-age for you-know-who. Let's do a special edition, our second "Lord, It's the Battle of the Bands"...but first, a word from our sponsor:

This music blogging event was first introduced by our friends, Fae and Stephen, and I'd like to give them a heartfelt "thank you":

Our battles take place twice a month: on the 1st and 15th.  The results come six days later: on the 7th and 21st. That's when I return, total all of the votes, maybe even mine (and it CAN happen - did you check out last battle?), and announce the winner.

First up, let's hear from a few guys who have been around the block, Christian music-wise: The Newsboys.  Lead singer Michael Tait came to the group by way of DC Talk. Jesus Freak, anyone? Remember that song? A fellow by the name of TobyMac as a former bandmate, too. But the group traces its roots back to 1985 when they formed "down under" in Australia.

Next up: Kari Jobe! Kari hasn't been around nearly as long, coming to the spotlight for this very song when she sang it at the Christ for the Nations Institute in 2004. Her first album followed in 2009 and snagged her a Dove Award.

Tough choice...or shoe in? You decide! No riots or recounts on my blog,
no sirree! You're driving this bus tonight. Vote in the comments and
then trot (or e-trot) over to the other participants, who consistently do
a much better job than I ever will, ha ha.

ANGELS BARK
CURIOUS AS A CATHY
DISCCONNECTED
J.A.SCOTT
JINGLE JANGLE JUNGLE
MIKE'S RAMBLINGS
STMcC PRESENTS BATTLE OF THE BANDS
THE DOG LADY'S DEN
THE SOUND OF ONE HAND TYPING
TOSSING IT OUT
JANIE JUNEBUG RIGHTING AND EDITING
YOUR DAILY DOSE
Posted by Cherdo at 12:00 AM