BOTB Super Late Results: We DO Monkey Around 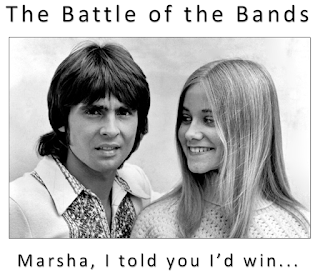 Oh dear Lord, first I was late on my tally and then Blogger was not my friend  and I didn't have time to mess with it...but it has "fixed itself"? This is the first sign on early (cough, cough) onset dementia.

But, the winner, but ONE VOTE:  Davy Jones!

Sorry for the short post...hope springs eternal that it will be better next month. You know who is really good at this? EVERY SINGLE PERSON WHO DOES IT BUT ME.

Battle of the Bands: The People Say They Monkee Around

As always, this love fest is the product of my friends, FAE (never absent in my heart, always in my prayers) and Stephen T. McCarthy (Monkee-ing around enthusiast...). I'm a once a month participant on the 15th, and returning on the 21st with results of YOUR voting, so let's get this show on the road. 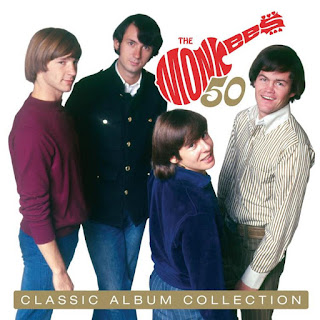 In their heyday, my pal Patti and I worshipped the Monkees. You know what's groovy? The records we wore out...far groovier that when they started, quite literally. We loved everything about them: television, Tiger Beat magazine articles, product endorsements, 45s, LPs, lunch boxes (check, check, check...you get the drill). Just say "Monkee" and we were in. Or say grossly-over-promoted-over-saturated-teeny-bopper-market-of-the-60s-and-70s...I'm still in, but that was a nice try.

But soon, the party (as they say) was over and the Monkee men when their separate ways. What does a non-Monkee do with his time?  Or, more accurately, who does it BEST? Since we are talking music on this blog event, and solo efforts, I'm picking the two who I think might be more evenly matched.

"It's all so scientific," she said to herself.


Mike Nesmith's biggest hit, to me, was a version NOT sung by Mike. Written in 1965, this little ditty didn't really show its head till "Different Drum" was covered by Linda Ronstadt in 1967 and consequently reached a respectable #13 on the Billboard Hot 100 chart. Various artists have covered "Different Drum" in the years since, but it is first and foremost a Mike tune!

Mike rendition is a tad country-rock for me, but I remain Monkee-loyal. So, play, magic fingers!

Davy Jones, what a heartthrob! I'm sure I'm the only one who thought so...ahem. He appeared in a Brady Bunch episode entitled, "Getting Davy Jones." Hey, why didn't I ever think to invite Davy Jones to a dance? Perhaps because I wasn't even a teen yet when it came out (but I would have given him a ride on my bike and that's gotta count for sumthin').

The song "Girl" was Davy Jones' 8th single, not necessarily the best but it is the one I always remember most fondly. Marcia, Marcia, Marcia...

You'll be tempted to give him extra points for the ruffled shirt, but keep this professional people. Now, vote! I know you can - I'm a believer!

Visit these other bloggeroonis and participate in their Battles, too! See you on the 21st with the results.

Flipping out, with a Springtime, pollen laden twist!
Cherdo