Battle of the Bands: God Save Queen Battle 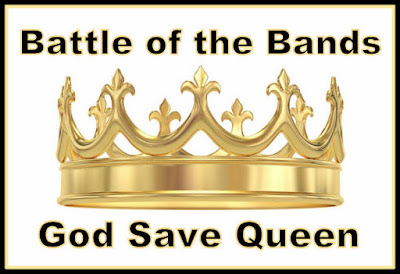 Oh, sweet-peeps, we are heading into a Queen tale on the big screen as Rami Malik attempts to embody the late, great Freddie Mercury. God Save (the) Queen! Will he pull it off? Will Stephen T. McCarthy's 8 Ball chime in?

All hail my dear friends, FAR AWAY EYES (never gone...never forgotten...NEVAAHHH!) and STEPHEN T. McCARTHY. This is our game plan: a new Battle gets posted on the 1st and 15th of each month and results appear magically six days later, on the 7th and 21st, when I add my own humble and unroyal vote to break a tie (if necessary), math it up, and announce the winner.

What would Freddie say about all this? Who wants to live forever...on film? I suspect he would; he always seemed to crave the audience's attention and delight in the way he would control their responses.


The original, the iconic, BOHEMIAN RHAPSODY is the tune to beat for this battle. Who dares challenge such a powerhouse? Wayne and Garth?

CONTENDER #1:  PANIC AT THE DISCO

Are instruments required for this battle? Aw, heck no! Next up.....

How much of a purist are you? You have to admit it takes guts to take on a classic. In two versions that are very close to the original, which one do YOU prefer? Come on, you can tell me, your ole' pal Cherdo...but I won't keep it a secret!

Speakin' of secrets I won't keep...there are some great battles that need your input. Click on the links below and give them your two cents or more. Round it up to a nickel, we're a wild bunch.  See you on the 21st with the outcome!


ANGELS BARK
CURIOUS AS A CATHY
JINGLE JANGLE JUNGLE
MIKE'S RAMBLINGS
STMcC PRESENTS BATTLE OF THE BANDS
THE DOG LADY'S DEN
THE SOUND OF ONE HAND TYPING
TOSSING IT OUT
Posted by Cherdo at 7:30 PM