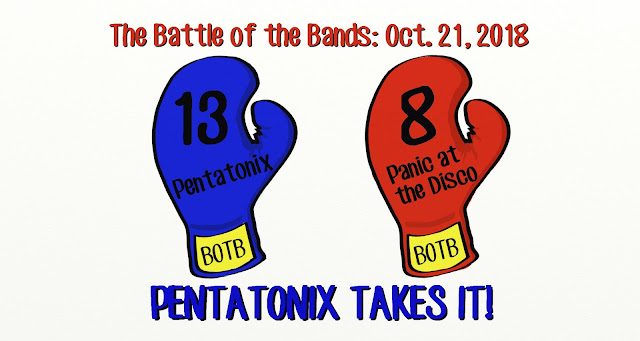 Wow, that was hardly a squeeker...at first, I thought my old buddies PANIC AT THE DISCO were gonna go home humbled. But eight is a respectable amount...you all may appear on stage without fear. Glad I could settle that for you, lest you lose sleep.

Thanks for the turnout and if I missed a battle, my apologies! I'm not spending that much time on the old computer but I'll do better next time.

To the victor!  Sing us out, PENTATONIX:

How did your vote hold up against the others? Did you pick a winner, you devil? Are you an ace at this?

Quick! Check the other battles that my peeps are hosting and join us here on the 1st of the month for the next battle...looks like it's time to be thankful in November...hint, hint...