Battle of the Bands: The Blame Game 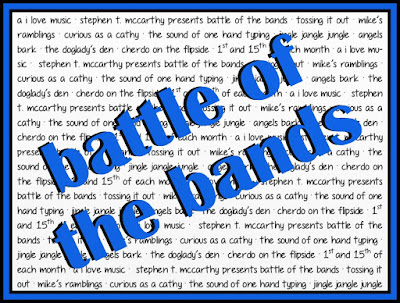 This is the BATTLE OF THE BANDS, folks. We proudly blame this funfest on FAR AWAY EYES and is currently maintained in the center ring by dear STEPHEN T. McCARTHY (my brudder from anudder mudder). IThe mighty Battle gets posted on the 1st and 15th of each month and results appear magically six days later, on the 7th and 21st. You then vote in the comments below and tell me which tune is your favorite and why (if you want to elaborate). If it's absolutely necessary, I add my own humble vote to break a tie and announce the winner. Then you CAN blame me.

Let's look at three very different tunes that conjure up the word "blame" in three different ways. And, as always, I gotta ask: which is your favorite? Why? Share your thoughts, my peeps.

CONTENDER #1:
HOWARD JONES
"No One Gets the Blame"

Remarkably, this Battle reminds me of our media coverage: no one gets the blame, blame it on every outside factor (but personal choice) and last, but rarely, okay...blame it one me.

Cherdo's Observations: Howard Jones, your hair has to obey the laws of gravity, just like everything else. Calvin Harris, that's a lot of underwear just to sing a song. George Ezra, I still can't believe that low voice is coming out of you. You look like my old paperboy who had a voice like Buffy from Family Affair. Back to biz...

If you hate every one of these tunes, blame it on me. 'Cause I'm a stand up gal. I can take it. The buck stops here. But first, pick the one you hate least OR (hopefully), vote for that gem you like the most.

Are you done? Nawwwww, what about my peeps? Check out these fine battles and give them your two cents. We all appreciate it. See you on the 21st!