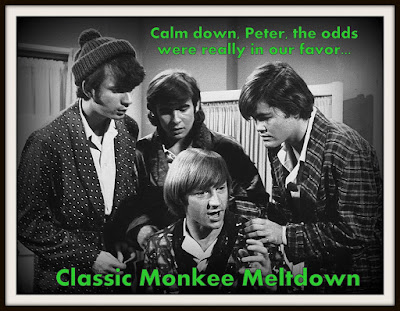 MPR News reported that "Pisces, Aquarius, Capricorn and Jones" by the Monkees was No. 1 on the Billboard album chart 51 years ago (as of January 2019). Good Lord, how can that be right? I wish that were fake news...where's that AARP card, I'm gonna need it?

Well, the good news is that they still can pull votes and this time, it was for the song "Words." Methinks it's a good thing that I didn't have to break a tie, 'cause I would have waivered between them. They're like my childhood buddies that I don't want to tick off by saying I liked one more than the other. You know, that could affect my seat at the lunch table in the cafeteria...and really, is anything worth that kinda trauma? Really?

"What Am I Doing Hanging 'Round?":
Debra, John, Holli

To be perfectly honest, I'm glad we had this outcome. Peter Tork obviously wanted to be taken seriously for his part in this song, as evidenced by some of his dramatic tune-delivery faces: 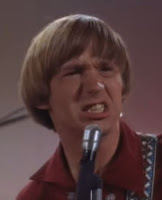 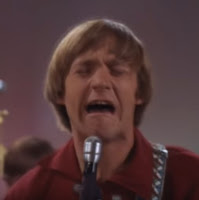 I don't know about you, but I don't want to be responsible for disappointing the recently departed. {{{shudder}}}

You know the drill, peeps: to the victor! Sing us out, and no Monkeeing around this time!

Now, go check out the peeps and see how your vote stacked up against the others. I'll see you back here on the 15th!