BOTB Results: Who "Worked It" Best? 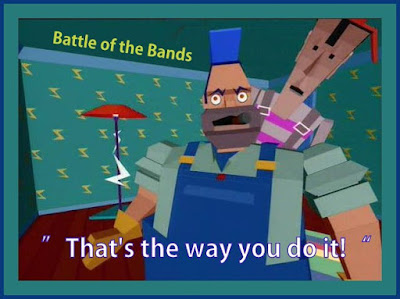 Friends, we definitely worked the rock and roll tributes to vocational responsibilities...it was oh sooooo close, but I'm not a bit surprised that our winner!

Huey Lewis and the News: "Working for a Livin'"
Mike, John

In my humble opinion, Dire Straits is more than than the "sultans of swing," they are rock and roll gods (little g gods, people...little g) and deserve any and all praise! And "Money for Nothing" has to be in their top three. In the age of MTV glory, this song surely was played to death, but I'm okay with it.

To the victors! Spin it one more time, boys:

If you haven't done so already, you know what comes next -- check out the peeps blogs!

See you on the first of the month for our next battle of the bands!


AISASAMI
CURIOUS AS A CATHY
JINGLE JANGLE JUNGLE
MIKE'S RAMBLINGS
STMcC PRESENTS BATTLE OF THE BANDS
THE DOG LADY'S DEN
THE SOUND OF ONE HAND TYPING
TOSSING IT OUT
Posted by Cherdo at 5:10 PM